We would like to implement working together with Japan to create of the Thailand silk business future by design and feature. 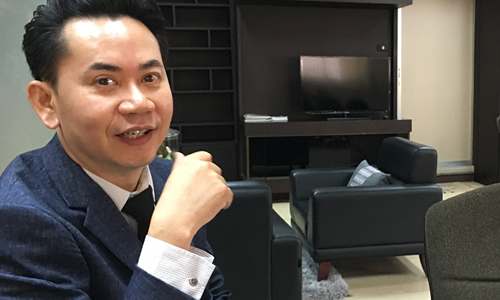 PROFILEAfter he earned a master's degree a textile course at The Hong Kong Polytechnic University, in 1998, he joined THTI and become a technical expert for knitting machine, quality control manager, then he acceded Director of technology promotion in 2004. After that, He produced the project of adding high value on the Thailand silk product, was assigned as judge for silk exhibition in Thailand every year.

The history of silkworm industry in Thailand and current situation

The total quantity of the silk produced 670tons in Thailand at 2014. The amount is smaller than the large-scale production areas such as China and the India, but the Thailand is very active in sericulture and produces raw silk.
Recently, the Royal Project (sericultural support by the Thailand royal family) and the price increase of raw silk tend to increase the number of sericulture farmers. It is a particularly prosperous and valuable source of income in mountainous areas, and it can be said that Thailand people's lives and sericulture are closely related.
Out of the annual production approximately 80% are consumed in Thailand, and used as a formal dress for jackets and skirts, as well as a high-end brand such as Jim Thompson and scarves and accessories for tourists from overseas.
Since the production of silk has fallen globally, Thailand is taking measures to increase the sericulture farmer. Specifically, the municipality and the silk industry-related companies constructs the design development and support of market development, in order to advance the cultivation of the poor farmers. Even now, in Viet Nam, Cambodia and Myanmar sericulture is a widespread movement. Preceding Thailand is one of the industries that have been providing advice and technical offer to such a country, and sericulture is activated in all ASEAN areas.

The issues of silk industry in Thailand

In recent years, production technology has improved by various research in China and Brazil, while the silk sericulture is being advanced, I have to say that Thailand stays behind the competing countries in terms of profitability and quality.
In Thailand, where the climate is high temperate, the silkworm are soft and tends to spit out low density bacteria. For this reason, generated quality problems, such as making yarn easier to cut when used for high-grade silk fabric. In addition, developing new technologies and facilities are delayed. Therefore, it was impossible to get out of the region of the traditional industry easily, and it became the domestic consumption and the souvenir position in the country. It was not in the situation to acquire more profit by the high value addition and the overseas advancement. THTI members at THTI office and the silk stall that made use of Thailand's unique silk texture.

The future of Thailand industry, the new manufacturing rooted in tradition and the challenge to the world market

In Thailand, we have started to create new silk sericultural in order to overcome these problems and current situation. One of them is the manufacturing that makes use of the goodness of Thailand own silk thread.
The biggest feature of Thailand silk is that there has knots. The natural texture of the Thailand is the goodness of silk thread, and we are currently working on making products that take advantage of its good feature.
Specifically, in addition to Thailand's own design, we are working with Italy consultants to develop silk fabrics for Europe and America. The theme of each season is decided twice every year, and the textile is developed using the Thailand silk.
Those developed fabrics are exhibited at Premiere Vision (the world's largest fabric trade fair in Paris) and are proposed to buyers from all over the world.
In fact, at the exhibition, there are inquiries from fashion brands around the world, so it is one of the bridges between Thailand silk sericultural and overseas.

New adding value and the possibility of the action with Japanese new silk sericultural concept.

But there are still challenges left. Because, if it will become the fabric for luxury brands around the world, there has to be no knots and smooth. In addition, it needs to be sturdy textile for all products. So it is necessary to improve the quality of the original raw silk. At this point, it is inferior to Brazil and China because of the environmental problems, such as the, and the climate. Therefore, we need to challenge more drastic reforms  What I am currently thinking about in Thailand is research and development for the production of easy-care silk that can be laundered by mixing synthetic fibers such as silk and polyester. THTI has accumulated a variety of technologies for yarn processing and fabric processing, and since we are currently conducting such research, we hope that can be used as our know-how in the field of silk as well.
However, in the world of unprecedented, I think that it is difficult to solve the problem only in one country among other problems. So I was excited to hear about “the new Silk sericultural initiative” in Yamaga City. It has a big impact that a large-scale project to produce a stable, high-quality cocoon in a system that is not yet in the world starts in the Japan which was the biggest silk country before. This is because many countries around the world are paying attention to the Japan that was a biggest silk country half a century ago, and new initiatives in the field of silkworm, such as genetic recombination technology, are still being transmitted from Japan. In other words, the world expects Japan.
So, we hope to challenge the creation of silk yarn adding value of easy care with Japan, we can do something new project.
We continue to pay attention to this project as it will be good efforts that will lead to a brighter future for Japan and Thailand.

Mr. Chanchai, who showed us the exhibition at Premiere Vision.